The Effects of Cannabinoids in Breast Milk

If you’ve stayed current with news concerning the many benefits that are associated with CBN, CBD, and marijuana use, then the latest claim that the body produces the same type of cannabinoids that marijuana does, may have you feeling both excited and confused. Unfortunately, these claims are simply untrue. Yes, the body produces cannabinoids, but they are very different from the same types of cannabinoids that you’ll find in the cannabis plant.

Naturally occurring cannabinoids in breast milk are there for a reason. They help during both the pre and postnatal development. They’re not harmful to your infant, in fact, they’re beneficial. Phytocannabinoids, which are the cannabinoids in cannabis, is another story. Cannabis use when you breastfeed is not recommended since these cannabinoids will find their way into your breast milk.

A process that’s similar to what’s used to make soap called saponification has played a role in research development, teaching us more about how cannabinoids attach themselves to the fat found in breast milk. Scientists have developed a method based on this process and it has been successfully used to isolate the cannabinoids from the fat in breast milk. Because of this process, different traces of active components of cannabis plants have been detected in milk. Research findings have suggested that cannabinoids can make a child less susceptible to the psychoactive effects of the marijuana plant when compared to adults. However, the effects of these components on infants are mostly unknown since the current methods used are very limited when it comes to measuring different types of cannabinoids, aside from THC.

The European Journal of Pharmacology published a study back in 2004 that claims all humans are born with cannabinoid receptors. This suggests that endocannabinoids and their receptors have a major influence during prenatal and postnatal development. In the 1970s, it was shown that the endocannabinoids played a role in the process related to appetite and food. However, it took three decades for these endocannabinoids to be detected in both human and bovine milk.

Researchers discovered that not only are cannabinoids vital during prenatal development, but they also work as a stimulus for a newborn when they begin to drink milk. The study showed that the CB1 receptor activation was critical for sucking milk. This shows us that the endocannabinoid system is vital in the development of an infant’s appetite when they first learn how to feed. But the endocannabinoid system does not only offer food-related functions. These components can also work to protect neurons after an infant is born.

Research is ongoing and there is still much to learn concerning the relation of cannabinoid in breast milk. As an example, we already know that cannabinoids can easily adhere to fat and fat is abundant in breast milk. Because of this, researchers are currently studying whether cannabis exposure to the mother during the lactation period has an impact on the transmission of the active components in cannabis to newborns. Unfortunately, analyzing fats and cannabinoids separately is very difficult and because of this, the progress of the study has been significantly slowed down.

Does Breast Milk Contain the Same Cannabinoids as the Cannabis Plant? 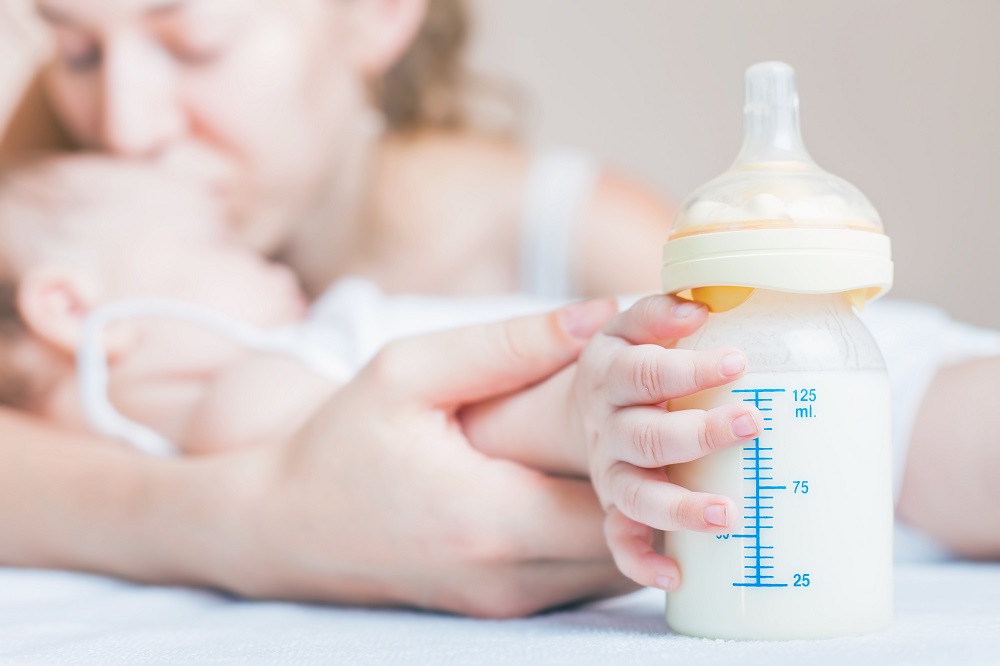 No. there were some reports back in 2017 that claimed that human breast milk naturally contained the same types of cannabinoids that are found in the marijuana plant. Scientists reviewed these claims and of course agreed that breast milk does contain the same cannabis cannabinoids, but that the cannabinoids in breast milk were in fact, endocannabinoids, which are vital to human development but are much different than the cannabinoids that are found in marijuana. Unfortunately, at the time, a website was responsible for publishing an article that made these claims, which caused a lot of misinformation to float around the internet for several years. Fortunately, a group of scientists followed up with a study that disapproved those claims. This is just another example of why you can’t believe everything you read.

Unfortunately, while endocannabinoids are naturally found in breast milk, they are not found in baby formula, which may cause some women to reconsider bottle feeding.

The Endocannabinoids in Breast Milk

2-AG, or 2 arachidonoyl glycerol,  is the most abundant cannabinoid that’s found in breast milk. This is the endocannabinoid that’s also responsible for stimulating the same cell receptors that THC does. 2-AG is the endocannabinoid that plays a vital role in keeping newborn infants alive since it’s the one that’s responsible for the tongue muscles and suckling response. The CB1 receptors in the brain are what controls both of these functions. A baby could develop a disease known as non-organic ability to thrive, without these endocannabinoids. This type of condition occurs when a baby is not able to eat enough food to grow and thrive.

Endocannabinoids are responsible for many bodily functions, so it comes as no surprise that they also play a role after an infant is born, via the breast milk. Endocannabinoids are critical in both postnatal and prenatal development. High levels of cannabinoid and anandamide receptors are found in both the uterus and the embryo. The levels of anandamide are lowered naturally during implantation. Some researchers believe that higher than usual levels of anandamide are responsible for miscarriages in some cases. Research concerning endocannabinoids in breast milk and the role they play in infant development is ongoing.

There are many benefits linked to breastfeeding, especially during the first twelve months of life. But when you breastfeed, you’ll find that there are many limitations and restrictions that you must follow for your infant’s health. If you’re breastfeeding, pretty much everything you drink or ingest is going to end up in your breast milk, and this includes cannabis. If you’ve breastfed in the past, then you know how important it is to watch everything you eat and drink and how what you consume can have a major impact on your infant. As an example, most nursing mothers will avoid consuming caffeinated beverages since the caffeine will be passed into their breast milk and to their infant, preventing their infant from sleeping for hours. Spicy foods also must be avoided since they can have a negative impact on an infant’s digestion and may cause digestive upset.

Since cannabinoids can be passed into your breast milk, you cannot smoke marijuana or use products that contain THC. THC circulates through the bloodstream. Wherever there are fat cells present in the body, this cannabinoid will dissolve and stick around. Since breast milk contains high levels of fat, this means that the THC will be passed on to your infant, if you breastfeed after smoking. It can also make it’s way into the fetus’ system when you’re pregnant and can become concentrated in high levels in breast milk. Since research has shown that marijuana use when breastfeeding has the potential to negatively impact brain development, nursing mothers must abstain from CBN and THC use until they stop breastfeeding permanently, usually when their child reaches around twelve to twenty-four months of age.

Yes. You should never vape if you’re pregnant or breastfeeding. When you vape when you’re breastfeeding, harmful chemicals, including nicotine, are passed into your breast milk and onto your infant. You also cannot vape cannabis for the same reasons. To learn more, speak with your child’s pediatrician to learn about the dangers of vaping and smoking tobacco or cannabis products when breastfeeding.

No. Only endocannabinoids are naturally found in breast milk. CBD is a type of phytocannabinoid and does not naturally occur in the body. You may not be able to use CBD products if you breastfeed since cannabinoids bind themselves to fat in the body. Since CBD is a cannabinoid, it will bind with the high fat content in breast milk, and can be passed on to your infant when you breastfeed. However, some pregnant women swear by using the best CBD drops because of the many benefits it offers, such as CBD for nausea in the first trimester. If you’re unsure whether or not you can use CBD products when nursing, speaking with your OB/GYN before use.

Can I Use Terpenes When Breastfeeding?

Yes and no. Terpenes are found in everything we eat and many nursing women will use terpenes for sleep or as a way to relax at the end of a long day. Using a supplemental terpene profile will not have a negative impact on your infant when breastfeeding. Terpenes are used for their therapeutic effects but are also commonly used when smoking cannabis since they can magnify the effects of a strain. Pure profiles such as Lev8 Labs Ltd. Zkittles Strain Specific Terpenes can have a major impact on your mental clarity and energy level. When you’re breastfeeding and you use terpenes only for therapeutic purposes, such as a mental boost, energy boost, or to help you sleep at night, then you can expect this to have an impact on your infant. If you’re not certain whether or not terpene use is safe for your infant, then I recommend contacting their pediatrician, prior to use. You can also learn more about terpenes by clicking here to read my ultimate guide on terpenes, what they are, how they work, and how terpene use can help.

So, are cannabinoids naturally found in breast milk? Yes. But these are endocannabinoids, and they play a vital role during pre and postnatal development. Endocannabinoids are not the same type of cannabinoids that are found in cannabis and don’t cause the same effects. The naturally occurring cannabinoids in breast milk work to stimulate the appetite in newborns and activate the CB1 receptors in the brain, which are responsible for the suckling response. Cannabis use when breastfeeding is not recommended since these cannabinoids can make their way into the breast milk. THC, a psychoactive cannabinoid, can have a negative impact on an infant’s brain development, so if you do smoke or vape, eat edibles, or use other types of THC products, you must plan on abstaining for several months until your child has been weaned off of breast milk and is eating a diet of solid foods.