If you’re new to the world of cannabinoids and looking for a natural way to relieve pain, reduce anxiety, stress, and symptoms related to depression or inflammation, then you’re probably researching how cannabinoids work, what products are available, and what you can expect from treatment. “Are cannabinoids water-soluble?” This is a common question that most people who are new to cannabinoid use have, and it’s an important one since it can make taking cannabinoids easier and more discrete. Unfortunately, cannabinoids are classified as hydrophobic oily substances, which means that they are not water-soluble. However, they can be formulated to be water compatible, which gives the appearance that they’re water-soluble when they’re really not.

Are cannabinoids water soluble? No, they are not. Cannabinoids are a type of oily substance, and as you know, oil does not mix with water. But with advances made in science, scientists are proving that cannabinoids can be made water-compatible which means they can be mixed with liquids. With this latest discovery, THC water and other types of cannabinoid drinks are taking a market by storm. Some people believe, in the future, cannabinoid drinks will soon replace many types of alcohol in terms of sales and popularity.

Are Water-Soluble Cannabinoids a Reality?

The fact that cannabinoids are not naturally water-soluble doesn’t mean much in today’s world, especially when you consider how far we’ve come with the new and innovative cannabinoid-infused products. Is it possible to infuse beverages with cannabinoids? Yes. It can actually be done in a number of ways.

If you paid any attention to the medical cannabis industry than the odds are you’ve heard the term water-soluble CBD lately. Water-soluble means a compound will be able to homogeneously incorporate itself into the water by separating into ions or molecules. However, oily substances such as cannabinoids are naturally repellant to water, which is what forces it to separate from it.

Many popular cannabinoids such as THC and CBD can be made water compatible if they have been formulated correctly using techniques such as nanoemulsions or microemulsion-stable homogeneous mixtures.

Nanoemulsions can be prepared using a concentrated form that’s fully miscible with water. Because of this, it will appear water-soluble. However, both will require the use of surfactants, to dilute them, which can be a major concern. During this process is important to use as little surfactants as possible, Which is what gives nanoemulsions a better advantage. Basically, the amount of surfactants used for this type of preparation is up to ten times lower than what you would need when using microemulsions.

Cannabis extracted nanoemulsions allow the cannabinoids to easily mix with beverages, resulting in a whole new user experience, depending on the type of cannabis used.  This process makes the cannabinoid water-compatible at any level of concentration, which can provide exceptional bioavailability in addition to their therapeutic effects as they’re absorbed into the body either through topical application or oral use. Upon oral administration, the uptake begins almost immediately as soon as the compound is consumed. This means a faster onset of action and a higher potency for lower doses.

On average, just one cannabis plant can produce hundreds of cannabinoids many of which are currently being studied. THC is arguably the most popular and well-known out of all of them due to its psychoactive components. These recent innovations using the emulsion procedures have allowed THC researchers to figure out how we can ingest these important compounds in a variety of different ways. The THC infused products provide a faster onset time which means better results using a lower dosage. While this may seem simple, the process of developing a water-compatible cannabinoid is considered one of the biggest advances in the industry and it has led to the creation of new infused products including edibles and beverages.

THC is classified as a lipid with a significantly low solubility in water. As an example, your average edible dose of 10 mg of THC would require more than 3 liters of water to dissolve it. Just like other types of terpenoids, they readily dissolve in other lipids and alcohol. This has been attempted with the production of popular drinks that are alcohol-based and found on the cannabis market. However, if you’re looking for a THC infused beverage that does not contain alcohol than your options are very limited. This is because cannabis extract does not easily mix with water, which is why emulsifiers have been recruited for this task. Typically, these oils do not mix well, and often overpower the flavor and feel of the final product. Just like a vinaigrette or unpasteurized milk these mixtures will separate and settle and require the user to shake vigorously or stir constantly in order to blend them together before consuming.

As the cannabis industry continues to boom, many manufacturers are looking for new ways to deliver these effective cannabinoids that are designed to treat a variety of conditions, but some of these products aren’t quite ready yet.

As I mentioned earlier, recent advances in emulsion science, cannabis chemistry, and genetic modification have resulted in cannabinoids that are almost completely water-soluble. A more accurate term would be to call it water-compatible. By making cannabinoids water-compatible it opens the door to a new line of products that have been out of reach thus far. However, given the infant state of this research, many companies are are bringing these products to the market using vastly different approaches, all with the same goal. 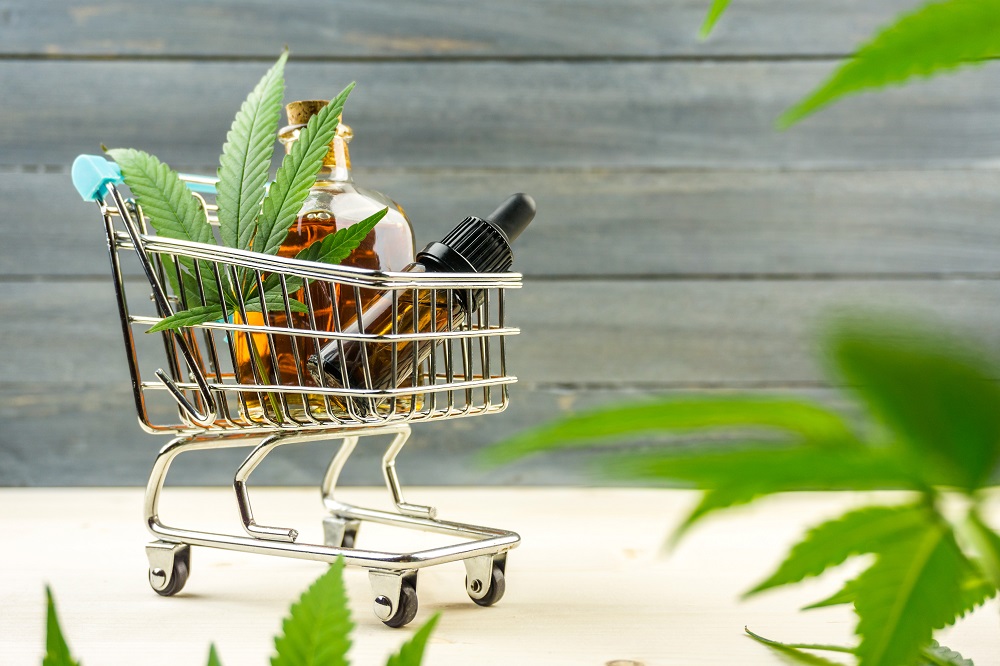 Currently, the cannabis market is mostly populated with products that have heavily relied upon oil-based delivery methods. They’ve learned how to produce these beverages through modernist cuisine and molecular gastronomy which has definitely employed a new type of technology for food production.

These types of microemulsions are usually achieved by packaging the THC extracts into tiny bubbles. Certain types of carrier oil further this process. These types of micro-bubbles are mixed into water or other types of liquids, easily, just by shaking the bottle. This process is used for pre-packaged beverages. Many of these beverages are very low in calories and we’ll take a different approach in terms of masking any type of remaining flavor or texture of the cannabinoids. Some companies will use carbonation and simply introduce more additives.

Currently, on the market Still Waters Ripple is one of the most famous THC water-soluble products. There are few other brands that have taken it a step further by creating a final product that comes in the form of powder, which is considered the most advanced form of water-compatible THC thus far. The powder formation allows users to add it to their drink discreetly. You can also use it by sprinkling it on your food. In terms of the popular Still Waters Ripple company,  they also make a dissolvable powder, however, even the powder is unable to dissolve entirely. These major companies continue to research the possibilities of cannabinoid beverages, with future plans to replace many popular brands of alcohol and soda, giving cannabis users a more enjoyable and discreet way to use cannabinoids when they’re in public view.

Water-Soluble THC Drinks in the Future

Some major companies have created powerful products that are not yet widely available. These companies have somehow managed to entirely remove the need for emulsifiers and additives. But essentially, these drinks basically consist of purified water and flavorless THC. However, the approaches used are considered much more advanced and innovative when compared to the standard emulsion processes and their effects.

Creating this type of oil-free beverage was accomplished by studying the human body and taking a closer look at the cannabis plant. Organisms naturally attach to THC. When a sugar molecule attaches itself to THC, this causes the compound to instantly become water-soluble. This test was conducted in genetically modified plants and via enzymatic fermentation. And the result? Beverages that are oil-free and additive-free.

Other companies are continuing to work on methods that some experts can only speculate will be effective. But Bioscience is one of the major companies that has finally figured out a way to add the THC extract to plain water, without impacting the taste or texture, and without the use of carrier oils, carbonation, and harmful additives.

Can You Safely Vape with Cannabinoids?

Can You Add Terpenes to Beverages?

Terpenes, like cannabinoids, are not water-soluble. They are an oil-based substance, so they cannot be mixed with any type of beverage. If you’ve used terpenes for pain in the past, then you may already know some of the important and powerful benefits these important compounds offer. If you’re interested in learning more about terpenes, how they work and how they’re used, click here to visit my ultimate terpenes buyer’s guide.

There have been reports that some CBD drinks do offer the type of results some users are looking for, but for the most part, these drinks will not be quite as effective as the best CBD drops, such as the Diamond CBD Full Spectrum MCT Hemp Oil. This is because the concentration of the drinks, compared to pure extracts is not comparable. If you’re looking for more effective results and the ability to adjust your dosage, stick with a pure CBD extraction.

Cannabinoid infused beverages seem to be in our future, whether the drink contains CBD, THC, or CBN. There is still plenty of research needed concerning dosing levels, effects, and product quality, but these drinks will allow people to use cannabinoids on the go, and more effectively.

For several reasons, more people are turning to THC and CBD infusions and stepping away from smoking cannabis. In order to fill the gap, the edibles market has exploded, offering a variety of sweet and savory products. While delicious, discreet, and long-lasting, this boom in the market also poses more challenges. Eating cannabis can extend and delay the effects since the cannabinoids must be digested before it hits the bloodstream.

This can result in a wide variety of unpredictable results and experiences. People often avoid eating edibles because of these unforeseen consequences. Water-soluble THC is the solution many people are looking for, especially those who are interested in a discreet way to use and benefit from THC use. So, are cannabinoids water soluble? No, but with the advances in science, the cannabis plant can be genetically altered in order to allow the cannabinoids to mix with water, without the use of an emulsifier. The future looks bright for the THC beverage industry, which is just another way that many people can use and benefit from this powerful cannabinoid in the future.