Dealing with anxiety on a daily basis can be stressful and can trigger unwanted chain reactions in our bodies if left untreated. This is why people often take medications for such issues but these modern drugs have potential side effects which can lead to even further complications which leaves people with little to no choice. That was the case up until CBD oils started flooding the market and getting famous. People started looking into this new trend and found out that there are companies which can extract just the cannabidiol from the hemp leaves and seeds without having THC in it. Still, some preferred small amounts of THC in their tinctures since that boosted other positive effects. The company Pure Hemp Botanicals is one of the leaders in terms of quality products and they have a wide range of CBD oils which are either isolates or full spectrum variations.

In this review we talk about their full spectrum CBD oils since they come with a far more beneficial effect and we discuss what the features of those are and how they can be used towards a certain condition such as anxiety, stress, or even depression.

Our Verdict: We recommend the Full Spectrum CBD Oil from Pure Hemp Botanicals to anyone who is dealing with high amounts of stress at work, day to day anxiety or other psychological or even physical issues. It is one of the most tested oils on the market and comes from a legitimate company that is well-known to the longtime users.

Before we move forward, we want to take a moment and explain that these CBD oils aren’t just dietary supplements. They have substances in them which can affect certain bodily functions, such as the liver enzyme system which is responsible for dealing with modern drugs and their absorption. Before you take any similar products always consult your physician about it and also discuss recommended daily intakes before starting the treatment.

Features That Make It Stand Out

The first and most important thing about this cbd oil is that it contains the maximum amount of cannabinoids in it, as per the US legislation. The hemp used is also home-grown and highly tested both by the company itself and by third-party laboratories.

Now, let’s take a look at what does this tincture contain.

The main cannabinoid here is CBD, but thanks to the full spectrum extraction, in which other cannabinoids are preserved, there are legal amounts of THC and CBN inside. That creates the so-called “entourage effect” which boosts the effect of the main substance which, as we said, is CBD. This effect was highly controversial years ago but more and more evidence pops up that small amounts of supporting cannabinoids really supports the potency of whichever main substance a company chooses to put.

Many users think that this is the best possible way of creating a CBD oil since it feels the strongest and has the least amount of side effects, even though there are some downsides which we will touch in a moment.

The hemp used for this oil is organic and home-grown as well as highly tested. It also is super open about the testings and you can even see how your batch was tested by entering a serial number on this link. Companies usually hide or not show their testings at all. These things are usually are a red flag but in this case the company is too old and too well-established in the community for such a thing to be an issue. Some new companies try to hide their testings and they go under in a matter of months. Surviving in this industry and having a good reputation among users is one of the hardest tasks in front of CBD companies and this one has proven itself time and time again during the last few years.

If you wondered where the hemp is from, it is the state of Colorado. It is a very well-known state for hemp plantation since it has the richest soils and the best weather for such crops. The company takes pride in their “from seed to bottle” policy which means that everything in the process is done in that US state.

Rundown Of The Effect

Since this is a full spectrum oil you might expect some stronger effects. Furthermore, this is a 1500 mg bottle meaning that each drop from the dropper will have 50 mg of extract. That is way more than a beginner would have to take and this is why we don’t really recommend this particular version for beginners. There are 150 mg and 300 mg bottles which are far more appropriate for people which are just now entering the world of CBD. Still, our bodies cannot overdose on CBD and there is no daily limit of taking it but sometimes the best effect is achieved by regulated intake.

There is no high effect since the core substance here is CBD and not THC which is what most people are after. Still, as we said, there is THC inside so people who work in places with drug tests shouldn’t take it as it can positivize a test result. The serving size is 1 ml, which is marked on the dropper.

You take this oil by putting one serving underneath your tongue and waiting for 40-60 seconds before swallowing. That way the important part of the oil will be able to absorb nicely before you take in the rest. Speaking of the rest of this tincture, it is based on a whole-plant extract. That means that there are some helpful fatty acids in it and it also can be used in cooking without altering the taste of your meal. Still, the breakdown temperature of CBD isn’t really high so don’t overcook it or cook it on high temperature setting.

Users dealing with anxiety report that the effect can be felt even after the first few hours and for a longer lasting result we suggest going for a lower amount of CBD for a longer period of time. That way you ensure an effect which helps your body reduce its stress levels to zero and create a healthier environment for your brain. If you want to learn more about CBD oils in general and see other top ranked products, check out our full Buyer’s Guide. There you will enjoy lots of tips, useful information, and helpful advice.

Unlike most other hemp oils and CBD extracts this tincture doesn’t have a peppermint flavor to it. Pure Hemp has taken a more neutral approach to that matter by simply leaving the organic hemp flavor to stay intact. That is great for experienced users but isn’t really good for beginners since they might not like the taste of the tincture and that will discourage them from maintaining a long treatment cycle.

There are no additives here which is what we like to see in a product these days and Pure Hemp assure us that the hemp crops are completely GMO free. On top of that, for our vegan viewers, this product is 100% vegan and cruelty free.

This tincture is suitable for cooking therefore you can make your favorite treats with CBD in them. Since there is no high effect associated with it, you can eat it before work, driving, or being out with friends.

If you want a different concentration of an Isolated CBD product which doesn’t contain THC, this company has you covered. There are 7 more tincture to choose from with different CBD concentrations and various other ingredients in them. And if you want to take your chances to another company, we recommend checking out our Vibe Hemp Oil review.

Let’s take a look at the pros and cons of this tincture now: 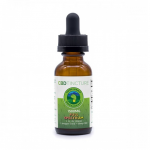 The Pure Hemp Botanicals Full Spectrum CBD Oil is a 1500 mg worth of happiness for experienced CBD users. It comes with a potent effect and is one of the purest forms of cannabinoid oils on the market. That is thanks to the amount of control, regulations, and testings which take place at the facilities in the state of Colorado. Users dealing with anxiety report vast changes in their condition as well as an array of other benefits for their bodies. Still, you shouldn’t forget that there are traces of THC here so it isn’t suitable for people working at corporate jobs. If placing a natural flavored hemp oil under your tongue isn’t your thing this tincture offers you the option to cook it into your favorite foods without it losing its effect. All in all, we gave this full spectrum oil a score of five out of five stars.